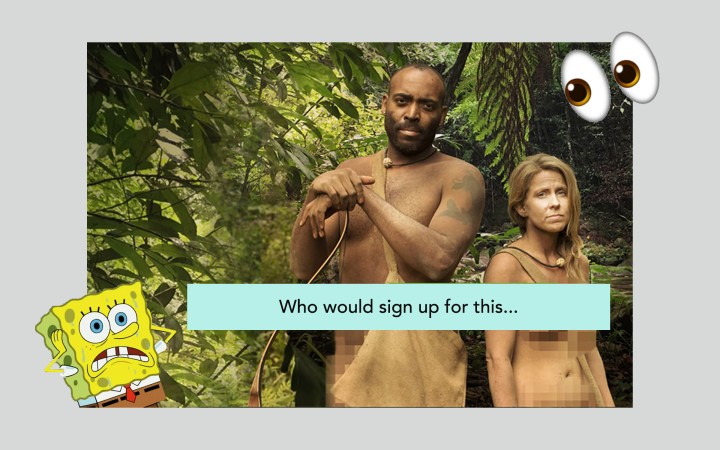 You know, I used to give my mom crap for watching this show.

I didn’t understand quite yet, I wasn’t hip. I saw naked people in the woods and couldn’t fathom why anyone would watch that or how the idea for the show made its way from a human brain into a board room, past many many advisors and through production onto the TV screen.

But the other day I turned the TV on just to have some noise in the background and of course – my mom had left the TV on the discovery channel as they were airing a marathon of Naked & Afraid. In lieu of taking the time to search through the channels to find some other show I knew I was just going to half-ignore I decided to leave the nude wilderness show on the screen.

I don’t know if that was a mistake or a blessing.

Because in the last week I have probably watched more or less 30 – 40 episodes of Naked & Afraid.

The producers just drop 2 (willing) participants in the middle of some awful location and they strip naked and try to survive for 21 days.

I was watching one episode where every 3 seconds they would be like: “oh look! There’s another water moccasin! Oh Wow! Another one over there!”

In another episode they dropped some people in the middle of the frickin Amazon and each night they were essentially eaten alive by mosquitos. No really. I mean swarmed by mosquitos each night. Think that one episode of Black Mirror where the killer robot bees swarm the victims. It’s like that.

And keep in mind – they’re naked. They’re getting bitten everywhere.

Actually I googled it and no one has ever died on this show – but one woman did contract dengue fever. And one time a producer was bitten by a venomous snake while scouting a location. He ended up being okay and coming out of that situation with nothing more than one rotted foot and probably a fairly high hospital bill. So I guess count that as a win?

But really I don’t know whether to give major props to these people or to reach out to them and make sure they’re….okay. I mean I understand camping, laying under the stars, going for a nice hike, appreciating the great outdoors. But to willingly put yourself in these situations where you’re starving, spending the night in freezing rain, watching out for venomous snakes, watching out for jaguars, being swarmed by mosquitos, trying to catch a fish while not be caught yourself by some crocodiles at the same time, getting horrific sunburns in sweltering heat () – it’s insane to me.

So I kind of get it now. The success of this show that is.

It’s crazy, but you also just really want to make sure they don’t die. And because of that my life has turned into an MTV version of True Life: I’m addicted to Naked & Afraid.

— Dana (a twenty something)

This site uses Akismet to reduce spam. Learn how your comment data is processed.